Get To Know a Healthy Hipster: Spencer

How would you describe your style of eating (veggie, flexitarian, omnivore, bacon-enthusiast)?

Certainly bacon-enthusiast, of those choices. And to quote Scott Pilgrim, “Bagels make you fat?” I eat a lot of pasta and risotto, and home made sweet potato fries. Those things are crack to me. Also I love making smoothies and juices at home.

What are some of the must haves in your fridge/pantry?

Lots of risotto, pesto, bacon and OJ. I really like pesto. Oh and goat-cheese. Mix up your standard spaghetti & parmesan with some chevre and pesto. It’s guaranteed to make you feel like a grown-up without dirtying more than a single pot! (Photo Credit: 101 Cookbooks)

My local bar Margret is pretty rad for just shooting the shit. I also work the door at my buddy’s night, Humblemania, which is held at the Ossington. The bartender, one in particular named Johnny, is so fucking rad. So those two bars are my jam. As far as venues go, I really like Czehoski and the Piston. The old haunts are great too though… I never have a better beer than one served by Teddy at the Horseshoe.

I’m not going to name my old employers, because they fired me. They had really great espresso though. The Good Neighbour is pretty good but I guess I’d have to go with Dark Horse… and Cherry Bomb of course! 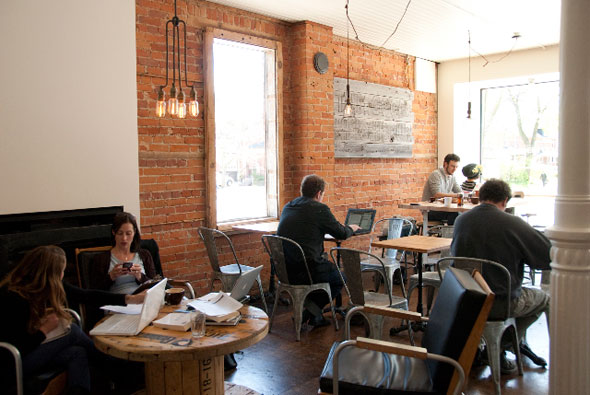 The Good Neighbour. The Junction, Toronto.

The guy from High Fidelity. Or the protagonist in most of my short stories.

Hands down, David Byrne. The hair, the beady-eyes (which I wish I could use on women). Also, all my friends rag on me for my trademark top-button-done-up-on-shirt look. I got that from him. I should really get on-top of a big suit…

Favourite ways to get active?

Who were you in high school?

I was your boyfriend for about four and a half years (**ahem…personal details, what!?!). I was also known to ride with the drama crowd.

Oh jeez. Maybe I’d ask you to make me something. I guess my mum’s quinoa, some sort of goat-cheese infused salad with spinach and baby greens and walnuts, bacon and a six-pack.

Most played song on your ipod?

What To Say by Born Ruffians, Don’t Worry About the Government by Talking Heads, and Quay Cur by the Fiery Furnaces. I’m really into Matthew Friedberger’s record called Death-In-Life. The sexiest church organ record you’ll ever hear in your life.

Get to Know a Healthy Hipster: Ryan

Get to Know a Healthy Hipster: Joy

Get to Know a Healthy Hipster (Couples Edition): Alexis & Zane