Let’s face it. The first week of work in September is always a slog. Summers over and you never did get to that cottage. Fall is in the air and you start thinking…maybe I should go back to school (probably you shouldn’t). Regardless, there’s no way any of you are going to be productive after 3pm today. So here are some links to keep you occupied…

These drawings by Aiden Koch.
Karly’s defense of Tinder and hookup culture.
This scathing inditement of positive affirmations.
This sweet reflection on the benefits of traveling solo.

While the last week of my life brought a whole new meaning to the phrase Spring Fever I seem to have finally made it through. Hooray!

As I was recovering, I received some lovely emails wishing me well (you’re all so sweet!) as well as a few asking me to post about my nutrition choices while recovering from an illness. I’m not sure if I follow any hard fast rules, I usually just give myself what I crave. This week that meant a lot of green smoothies, soups (lentil, butternut squash, tomato, etc.) and Ezekiel Toast Sandwiches with either almond butter, banana and honey or avocado and egg. I definitely favour starchy vegetables like carrots and potatoes and I can’t seem to get enough of oranges and kiwis (which also happen to be extremely high in Vitamin C).

In celebration of feeling a zillion times better, I am (finally) sharing some lovely shots from last weekend’s road trip…Broken down by category of things I love.

Primping ensued… (We kept it real classy with beer cups….)

Here are a few things that I came to realize this weekend….in no particular order.

1) I only want meals in bowl-form lately.

2 Whole Eggs Scrambled with Curry Powder, Mushrooms and Spinach. Served over a (buried) sweet potato and topped with 1/4 avocado, 1/4 cup hummus and some more trail mix

The past week or so I have been taking more days off the gym than on because my life has been so hectic and I’ve been doing a lot of walking around the city on my search for a new place to live. Also a lot of anxious fretting…does that count as a workout? Anyways I was pretty sure my first day back this morning was going to be brutal but to my surprise I had much more energy and stamina than usual. I even managed to complete a set of full bridges (also known as full wheel in yoga or sometimes reverse pushups) which is huge for me. A lack of upper body strength made bridges the bane of my existence during my days as a dancer.

This little personal success reminded me that giving your body extended time – not just a day but a whole week or two off – to rest and recover might be just what you need to avoid burning out and help you break through your own fitness plateaus.

Unlike many folks my age I wake up early. And do things. Things like cooking breakfast, reading the newspaper, moving my body in some way, grocery shopping and (very occasionally) cleaning my house. I get razzed about this all the time but honestly I like my morning routine and lovingly accept myself for the nerdy proto-grandma that I am. But I definitely can’t (nor would I want to) keep this schedule all the time…Sometimes it’s a Saturday night and one of your favourite bands is playing and your friends are out and you just want to dance till an unreasonable hour….

Good morning everyone! And those of you living in Ontario Happy Family Day! Is that the worst name for a civic holiday of all time? Possibly. But I have a long weekend in February so who’s complaining?

First up, some exciting news! The Healthy Hipster was featured by Toronto-based sassfactory & pilates instructor extraordinaire Brittany on her blog Fine Tune Pilates. So if you want to hear me rant about exercise trends, scrawny hipsters, the fine art of gym fashion & songs I can’t stop listening to….Read the interview here.

I haven’t spent much time at home over the long weekend so my eats have been extremely grab and go. Reheated steel cut oats, almond butter & jam sandwiches, crackers, baby carrots & fennel, heaps of hummus & about 3 bars of dark chocolate have been my main sources of sustenance. Since these don’t sound like pretty pictures to me, I figured I would dedicate today to a photo journal of the things I officially deemed more important than elaborate meals this weekend.

Tickets for two shows I am crazy excited for in March.

New jewellery. I saw this in a little vintage store and immediately exclaimed “IS THAT AN EAR CUFF!? ” Clearly it is now MY ear cuff.

Stopped into one of my favourite bars up on Bloor St. West The Piston…Don’t let the all black paint job or the lack of sign fool ya, it’s a friendly little spot that also happens to host some great live music shows. Thursday was no exception as one of my absolute favourite Halifax import bands The Taste tore the place down with swoonworthy Harry Nilsson style pop jams.

I also popped into Nobody Writes to the Colonel to wish a happy birthday to my good pal Graham Wright. I’d never been to this spot before but it’s warm, cozy atmosphere put everyone in a particularly adorable mood I think.

Friday was a big ol’ Motown dance party called The Big Sound, featuring a local Toronto indie bands singin nothin but the hits. It. Was. Amazing. Don’t believe me? Watch this.

And you guessed it, I’m off again to enjoy this last day of long weekend freedom! Although I must say I’m looking forward to posting some new recipes this week as domestic self is feeling rather abandoned at the  moment and the kitchen is calling my name! 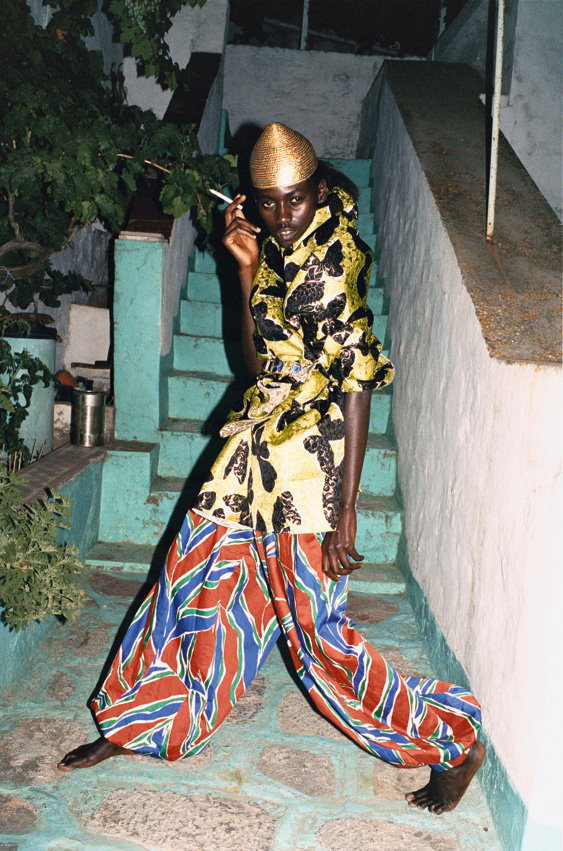 A visual history of Toronto’s yuppie-laden Liberty Village before all the loft conversions. [BlogTO]

Science still doesn’t understand female orgasms, but wants you to have more of them. [Women’s Health]

I am not in the kitchen today. Or the gym. I am in the sunshine. It’s 7 degrees in February and all I want to do is play outside.

So instead of a standard post I am sharing an assortment of things that have been inspiring me over the last week.

Memories of this fantastic production of Cruel and Tender by Canadian director Atom Egoyan.

While the play itself had some interesting thematic content I was completely enamoured with the cinematic quality of the staging. Visually stunning. Going to live theatre makes me feel just as giddy and excited as I did as a little kid. And I still HAVE to save my ticket stub and program.

A few snapshots of design details I fell in love with at the Interior Design Show. For some reason I keep returning to these ones.

I also can’t stop falling in love with this digital portrait series called The Avant/Garde Diaries. I especially love this one on Rosmarie Köckenberger’s post-industrial cafe/urban garden in Berlin.

Hidden in a 600 square meter big garden in Berlins’ neighborhood Kreuzberg, Rosmarie Köckenberger welcomes her guests, friends and residents to have a coffee and a warm chat in her KJOSK. An almost 50 year old, white painted double-decker bus is used as a mom-and-pop store where people can play Super Mario together, eat local sausages and have a after work beer. Rosmarie offers with her KJOSK a special place, overgrown with greens, to settle back from the bustle of a big city in a familiar atmosphere.

Off to enjoy the day! Hope you’re finding inspiration in unexpected places on this Monday afternoon…

Is it just me or has the first stretch of December flown by! Between working three jobs (ya you heard that right) and holiday preparations, it feels like I haven’t had a moment to spare. My meals and gym trips have been pretty dull so let’s move straight to the good stuff…HOLIDAY FUN!

First snowfall! Caught one on my nose and couldn’t stop giggling…

I kicked off the Holiday Season in a big way this past weekend with a whole buncha seriously festive activities. Here’s a little rundown…

CRAFT.
City of Craft, to be precise. This is my absolute favourite craft show of the season in Toronto and I look forward to it every year. This year it was spread out over two buildings and while I didn’t come home with my usual armloads of stuff, I was terribly inspired by everyone’s hard work.

Pendants and knitwear and leathergoods OH MY! Isn’t there a DJ at every Craft show? That’s a thing outside of West Queen West right? Ahem…

Ultimately I left with some beautifully printed paper items that made the whole visit worthwhile.

A little festive music with some old friends, the boys from Toronto’s own Tokyo Police Club. I went to the last of three shows they sold out at the Phoenix, which is an all-ages venue in Toronto that I used to go to all the time in high school. The whole night was nostalgic and adorable, basically a heartwarming holiday blast. It was almost too wholesome due to the median age at the show being about 16. I felt a bit too old to be there I must admit….

The highlight of the night was when they brought out the fellas from Born Ruffians, The Arkells, Said the Whale & The Fabulous Yawn to sing a rousing rendition of “Santa Claus is Comin’ to Town.”

I warned you it was wholesome.

Don’t worry. We more than made up for it at the after party later in the evening. Healthy Hipster Holiday Kryptonite = Tequila & Soda. And no, you don’t get to see those pictures 😉

Every year my Jewish father throws a Christmas party at his loft (Yup. Modern Family has nothing on me).

I promise I’ll be bombarding you with loads of recipes & holiday food + fitness tips in the coming weeks but for the moment….

How are you kicking off your Holiday Season?

Sorry for the mini hiatus but it was birthday week in these parts and I have been busy PARTYING MY FACE OFF.

Here’s a rundown of what the party really looked like this year…as I celebrated my 25th: 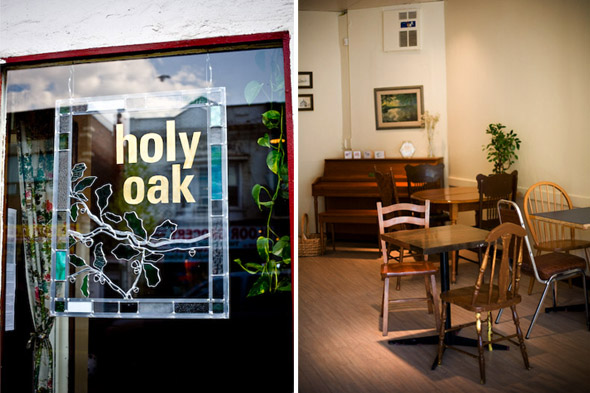 It was a show called His Greatness, about Tennessee Williams living in 1980s Vancouver. These tickets were courtesy of my pops, whattaguy! 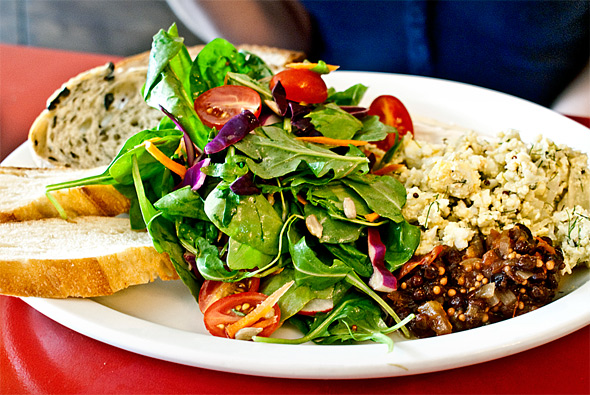 In Sum: I spent the day with the friends and family I love, supporting the businesses, restaurants and artists that make my community so wonderful. Sure I do these things every day, but on my birthday it felt special. Simple. But it suited me.
How do you like to celebrate your birthday? Home Cooking or Restaurants? Do you like to go adventuring or do you enjoy staying local?
October 20, 2011 by the healthy hipster
cities, community, culture, healthy treats, inspiration, photojournal, snacks

Today was one of those Saturdays when I left the house with no plan at all, but by the end of the day I realized I spent it doing just what I wanted.

Grabbed lunch at one of my favourite West end haunts, Cafe Bernate.

My standard order...Bernate Salad with chicken and a side of crusty bread

The park served as the perfect canvas for all the lovely art pieces on display, with a bright blue sky and autumn leaves as far as the eye could see.

Everyone was lying around being stupidly adorable…And there were babies and puppies galore!

I didn’t want to be that guy taking photos of all the art, but I couldn’t help snapping a shot of these adorable little terrariums by local artist Jessie Trott.

Stopped in for some more caffeine and sustenance at a little organic food  school bus.

Sometimes nothing beats an adventure in your very own neighborhood to start the weekend off right!